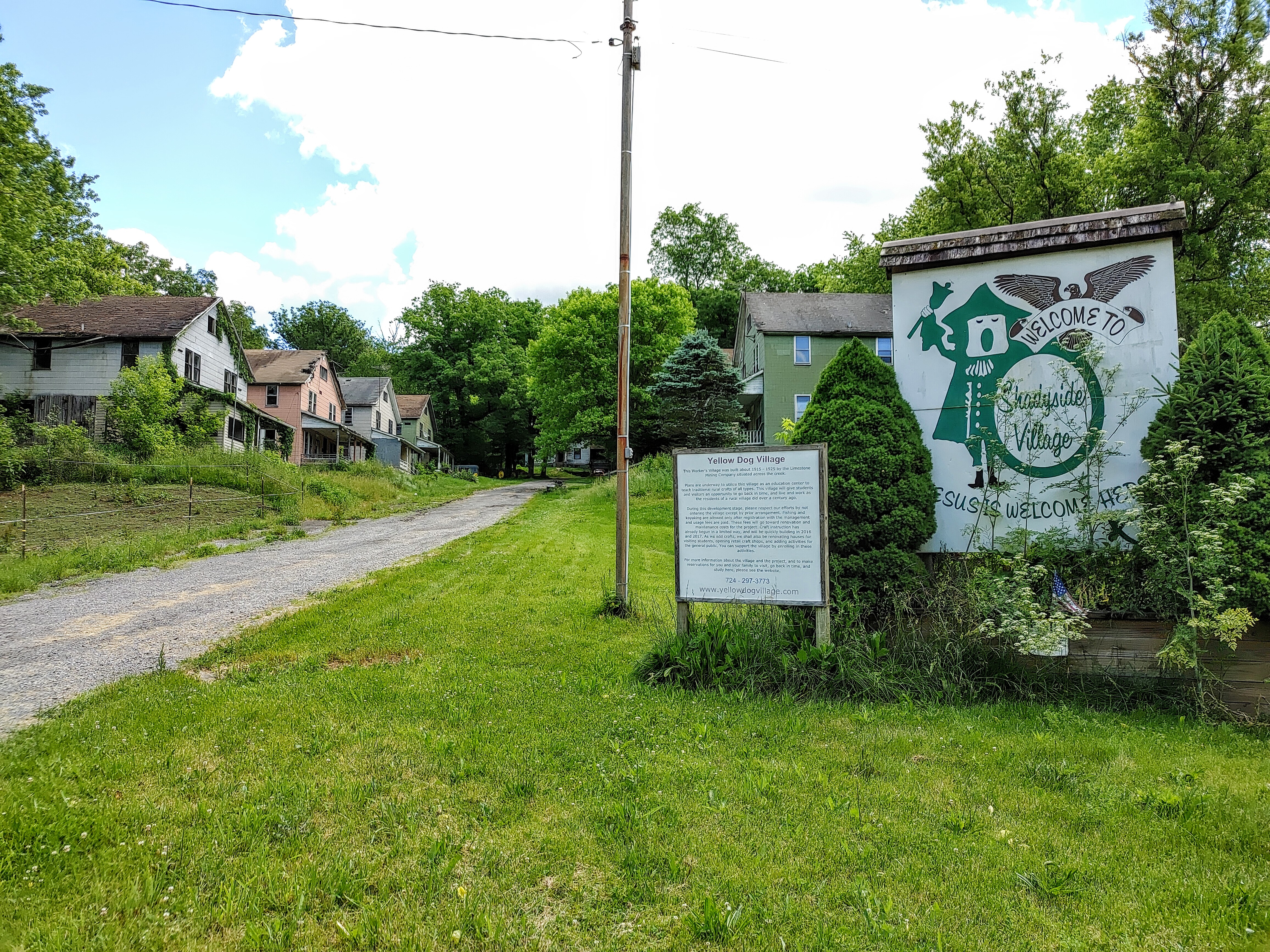 Introduction: Yellow Dog Village is a partially abandoned mining town that was left to the elements after the final resident moved out in around 2011. The village once served as home to workers at the Buffalo Creek Mine, but after the mine’s closing and many hardships residents were forced to move out. The village is now owned by a retired history teacher who has big hopes for the village. Today historical and photography tours are offered of the village. Many of the homes appear as though the residents left suddenly one day and never returned, with personal items such as family photos left behind. Other homes are almost empty.

Yellow Dog Village is a small mining village located in Worthington, Pennsylvania. The mine, known as the Buffalo Creek Mine,  sits just outside of the village and was rich with limestone. The trip from the town of Worthington was difficult for workers due to poor road conditions and distance, so the workers asked the company to provide housing. The company agreed, in return for the promise that the workers would not create a union.  The company also offered better wages and better treatment. Both sides agreed and stuck to their promises. Construction of the village was begun in the early 1900’s, between 1910-1920. The term yellow dog actually refers to an agreement between a company and its workers that the workers will not join a union, thus the village became known as Yellow Dog Village.

The mining company went bankrupt during the Great Depression, leading to the village being sold multiple times. The village has had many names, including Shady Side Village and MAK Square. The village finally returned to it’s original name, Yellow Dog Village after being purchased by its current owner. Many factors contributed to the abandonment of the village, including the mine closing in the 1950’s, the housing boom, and the shut off of water to the property.  The last residents of the village moved out sometime in the year 2011, leaving the village completely abandoned. Over the next couple years the village was left to vandalism,  until being purchased in 2014 by the current owner.

Yellow Dog Village is currently owned by a retired history teacher, purchased in 2014. He had plans to restore and revitalize the village, turning it into a living history museum. Plans include creating lodging within the homes where guests can stay and experience life in the 20th century.  If you are interested in assisting with the preservation of this site, consider taking a tour yourself.

***This post is not sponsored in any way, I only support the mission of the current owner to revive this great site.***

After driving along secluded country roads you will come upon a sign reading Welcome to Shady Side Village. Right beside it you will find the recently added Yellow Dog Village sign put in place by the current owner. Behind it you will see two rows of houses. The first row which is closest to the entrance is the side that the current owner has begun construction and repairs on. This side looks well kept. If you continue on to the second row you will come upon what looks like a long lost street covered in overgrown weeds. This is the completely abandoned section of the village that visitors are free to explore (with prior permission of course!)

At the top of the second row of houses sits the old boarding house. All of the homes within the village are structurally sound, but as the owner described the boarding house is in the worst condition because of the roof partially collapsing in about three years ago. Even so, the boarding house is still safe to visit and is an urban explorer’s photography paradise. The peeling paint, remaining furniture, and decaying ceiling fan makes for a great photo op.

When looking down the hill from the boarding house, the left row of homes are all single family homes and the homes on the right are two family homes. The homes are all very similar, but the items you find within are uniquely different and personal.

As seen in the image below, many of the homes still had day to day items, such as peanut butter and cans of spam.

Again, looking down the hill from the boarding house, the row of homes on the right side are double family homes, or duplexes. Most of these homes are fairly empty, but in one home you can find a complete living room still set up and another home appears as if the residents had left one day to the store and never returned. In this home you can find family photos, a dish rack full of dust lined dishes that were perfectly placed as if they had just been washed, and even a cell phone sitting in the kitchen.

Many of the homes had evidence of children living in them, such as the room pictured below with stuffed animals, books, and a toy kitchen. Many have tot finder stickers in the windows. One home had a school planner and yearbook in it.

One of the homes looked completely untouched, with clothing still hanging in the closet and a TV set up on the other side of the room. Many homes were littered with mail, newspapers, bills, and notices of electrical shut off.

Many of the homes are missing windows and doors that were kicked out by vandals, but otherwise the homes are in decent shape, structurally sound, and require mostly cosmetic updates.

While the homes of Yellow Dog Village are structurally sound and the risk with this location is generally low, it is always important to consider safety factors when visiting an abandoned location.

Also make sure that you always bring the essential gear and if you have room and don’t mind the extra weight you can find a complete packing list here.

When visiting a location, be respectful of the location and the owners. Do not enter without permission, the current owner of Yellow Dog Village is working hard to restore it and preserve the history. Visit the Yellow Dog Village facebook page or webpage for more information

When visiting abandoned locations, always remember the motto…Leave nothing but footprints, take nothing but photographs.